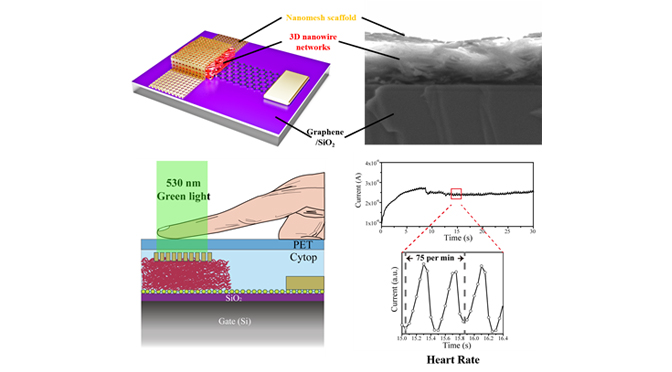 Researchers from the University of Strasbourg and CNRS (France), in collaboration with Tsinghua University and Shenzhen University (China), have developed an organic photodetector that is extremely sensitive in the visible and near-infrared range, with which a first application in the field of health monitoring has been realized. These results have just been published in Nature Communications.

The efficient detection of light has become an essential technology of the Information era, leading to the advent of devices capable of converting light radiation into an electrical signal, called photodetectors. Photodetectors sensitive to near-infrared radiation, i.e., at wavelengths above 780 nm, are of particular interest for many applications such as motion detection, food and water quality control, biomedical imaging, as well as health and environmental monitoring.

Among the active materials used for photodetection, organic semiconductors offer undeniable advantages over their traditional inorganic counterparts (silicon, germanium, gallium arsenide, etc.), namely easy-to-tune optical and electrical properties and good compatibility with the fabrication processes used in industry. Self-assembled semiconductor organic nanowires are spatially confined nanostructures with a diameter in the range of 2 to 200 nm and a length ranging from a few hundred nanometers to several millimeters, allowing electrons, holes or photons to move freely in one dimension, making them ideal molecular building blocks for applications in nanoelectronics and nanophotonics, bridging the gap between the mesoscopic world (100 nm–1 µm) and the macroscopic world (> 1 µm).

Researchers from Strasbourg, Beijing and Shenzhen have thus developed a vertical phototransistor consisting of a continuous network of supramolecularly engineered perylene nanowires sandwiched between a lower graphene electrode and an upper gold electrode. The trick is to use not a continuous layer of gold for the top electrode, but a nanomesh array, giving the gold electrode the appearance of a “punched card”, resulting in a better contact with the nanowires as well as a higher transparency due to the presence of nanoholes. This unique architecture leads to excellent electrical and optoelectronic properties. In addition, the phototransistor is ultra-sensitive in a wide spectral range (from visible to near-infrared), outperforming devices based on complex organic materials with narrow bandgaps typically used for near-infrared light detection.

As a proof-of-concept, the researchers have fabricated a sensor capable of measuring the heart rate of a patient in real time. This is achieved by using a source of green light that passes through the fingertip placed on top of the phototransistor, which measures the transmitted light. Due to the variation of blood volume with each cardiac cycle, the pulse of the patient is extracted from the current measured in the phototransistor.

These results represent a major breakthrough for next-generation ultrasensitive near-infrared photodetectors and offer prospects for applications in many fields such as health care.