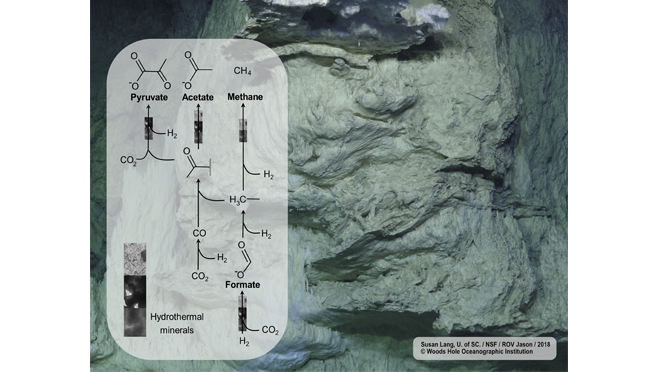 An international collaboration of researchers in Germany, France and Japan investigated the catalytic activities of minerals found in deep-sea hydrothermal vents. The results suggest that mineral-driven chemical reactions might be closely mapped onto microbial carbon metabolism.

Life on Earth could not have started without metabolism. Alkaline hydrothermal vents have been proposed as a possible environment where a primitive form of metabolism (protometabolism) predating cellular life could have emerged. The first steps of metabolism, which would have started as geological chemistry, might still be conserved in biochemical pathways that evolutionary biologists have identified as being ancient. One of them is the acetyl-CoA pathway. Microorganisms use it to convert carbon dioxide (CO2) to acetate and pyruvate, serving as an entry point to a more complex carbon metabolism. Interestingly, it is the only known biological carbon fixation route that uses hydrogen (H2) as a source of electrons, and H2 is very abundant in alkaline hydrothermal vent systems. Still, geochemically realistic CO2 fixation leading to higher-carbon biomolecules under biologically relevant deep-sea vent conditions has been challenging.

Looking for a bridge between the abiotic (non-life) and biotic (life), the researchers in Germany, France and Japan became inspired by the characteristics of the biological acetyl-CoA pathway. In biology, complex enzymes facilitate the reaction between CO2 and H2, but hydrothermal minerals can serve as catalysts for the non-enzymatic version of the same reaction. Prof. Joseph Moran, an organic chemist interested in the protometabolic origin of life and leader of the Laboratory of Chemical Catalysis at the University of Strasbourg (France) explains: “What acetyl-CoA pathway enzymes and hydrothermal minerals have in common is transition metals like iron (Fe) and nickel (Ni). These metals are also commonly used as catalysts in organic chemistry to promote notoriously difficult reactions.” The Strasbourg-based team had already explored fixing CO2 alone using metallic iron in the origin of life context. It was the right time to move on to geologically abundant mineral catalysts.

Biologist Prof. William Martin from the Heinrich Heine University in Düsseldorf has been investigating the parallels between biochemical and geochemical CO2 fixation for two decades. “Under physiological conditions, H2 alone is not reducing enough to fix CO2. We wanted to find catalysts that could have supported life at the very beginning, before the complex biological mechanisms were in place”, says Martin. Together with chemist Dr. Martina Preiner (co-first author of the paper), they reached out to a research group at the Max Planck Institute for Coal Research in Mülheim, Germany, led by Dr. Harun Tüysüz, who specializes in heterogeneous catalysis. After some brainstorming, Martin, Moran and Tüysüz decided the experiments would begin with H2, CO2 and minerals found in alkaline hydrothermal vents: awaruite and magnetite. However, the three teams were not the only ones with a similar goal. Researchers in Tokyo and Sapporo (Bioproduction Research Institute, National Institute of Advanced Industrial Science and Technology) had started reducing CO2 with H2 over iron sulfide catalysts (e.g. greigite mineral), which are also common in deep-sea vent systems. Microbiologist Dr. Kensuke Igarashi (co-first author of the study), who performed experiments with greigite in Sapporo, explains: “It was clear we can achieve a deeper understanding of our findings if we share our results with each other.”

Indeed, this open-minded approach proved to be very fruitful. Although CO2 fixation with H2 over three hydrothermal minerals—awaruite (Ni3Fe), magnetite (Fe3O4) and greigite (Fe3S4)—was performed in three different laboratories all over the world, the results lead to the same conclusion. “All these minerals catalyze the fixation of CO2 with H2 in water and yield products which correspond to those of the biological acetyl-CoA pathway: formate, acetate and pyruvate”, says Dr. Kamila Muchowska, a Strasbourg-based chemist and co-first author of the paper, responsible for magnetiteexperiments. “We studied the surface of all the minerals tested and we have strong evidence the reactions are catalytic and occur on the mineral surface” explains Tüysüz. “In the hydrothermal process of CO2 fixation hydrogen acts as an electron- and energy donor, just like in biology. It’s truly astonishing”, Preiner adds.

The researchers’ findings suggest that simple abiotic geochemical reactions could have paved the way for early metabolism that microbes still use today. Hydrothermal minerals could have functioned as geochemical primers for the later emergence of the enzymatic acetyl-CoA pathway. These results might not only be relevant for terrestrial hydrothermal systems, and the scientists do not exclude the possibility that protometabolism could be initiated by a similar route elsewhere.

The study is published in the journal Nature Ecology & Evolution and was funded by the European Research Council, the Volkswagen Foundation, Deutsche Forschungsgemeinschaft, the Max Planck Society, the Japan Society for the Promotion of Science, and the Japanese Ministry of Education, Culture, Sports, Science and Technology.