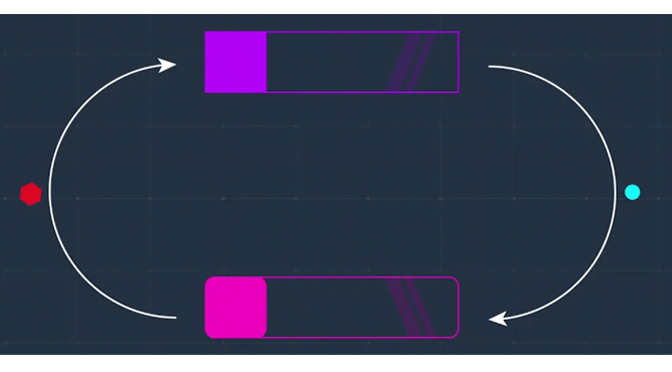 Chemically fuelled processes control size oscillations of natural fibres inside the body such as microtubules or actin filaments. Researchers from the University of Strasbourg have now discovered similar size oscillations in a completely artificial system. Brightly coloured molecules form extended supramolecular fibres that can be controlled by redox chemistry. In a continuous flow system, these fibres grow and shrink spontaneously. Self-oscillating artificial systems provide a stepping stone to life-like materials with applications in material science, medicine, and soft robotics. The results have been published in Nature Nanotechnology.

Living organisms use chemical fuels like guanosine triphosphate (GTP) to drive assembly and disassembly processes of fibres in the cytoskeleton. Microtubules for example are formed by tubulin bound to GTP, which self-assembles into long fibres. Once the fuel is consumed, which for microtubules is when GTP is hydrolysed to guanosine diphosphate GDP, the fibres disappear. Inside the cell such fibres can show spontaneous size oscillations, which serve to maintain the cytoskeleton and its functions.

Now researchers from the University of Strasbourg (France) and Aston University (UK) have developed a completely artificial system that works similarly to microtubules. They developed a molecule that can form fibres spontaneously through self-assembly, starting from small nuclei that rapidly grow. The molecule can be deactivated by reacting with a chemical reductant, which causes the fibres to disassemble. The molecules can be reactivated by oxygen (an oxidant), which makes the fibres grow again. In addition to spontaneous oscillations, the researchers have observed traveling waves of fibre formation, and intricate centimetre-scale patterns. They found that the interplay of self-assembly and fluid convection, leads to these mosaic-like structures. Overall, the work opens new pathways to obtain life-like artificial systems and materials, which can perform complex biological functions such as cell division in the future.