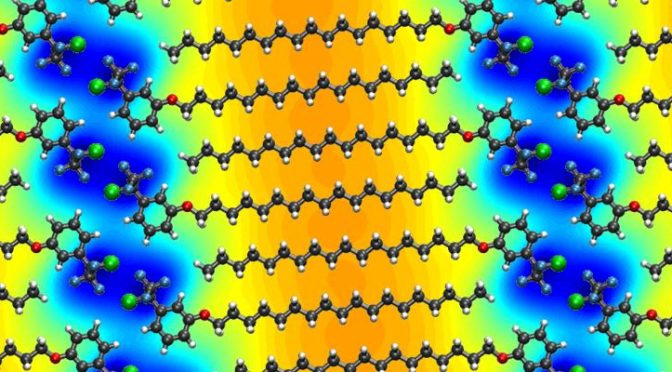 Researchers from the University of Strasbourg & CNRS (France), in collaboration with the University of Mons (Belgium), the Max Planck Institute for Polymer Research (Germany) and the Technische Universität Dresden (Germany), have devised a novel supramolecular strategy to introduce tunable 1D periodic potentials upon self-assembly of ad hoc organic building blocks on graphene, opening the way to the realization of hybrid organic–inorganic multilayer materials with unique electronic and optical properties. These results have been published in Nature Communications.

Vertical stacks of different two-dimensional (2D) crystals, such as graphene, boron nitride, etc., held together by weak van der Waals forces are commonly referred to as “van der Waals heterostructures”. Such sophisticated multilayer structures can be used as a versatile platform for the investigation of various phenomena at the nanoscale. In particular, mechanical superimposition of the 2D crystals generates 2D periodic potentials which impart to system unconventional physical and chemical properties.

Here a team of European researchers applied a supramolecular approach to form self-assembled organic molecular lattices with a controlled geometry and atomic precision on top of graphene, inducing 1D periodic potentials in the resulting organic–inorganic hybrid heterostructures. For that purpose, molecular building blocks were carefully designed and synthesized. Those are equipped with (i) a long aliphatic tail, directing the self-assembly and the periodicity of the potential, and (ii) a photoreactive diazirine head group, whose dipole moment modulates the surface potential of the underlying graphene sheet. Upon irradiation with ultraviolet (UV) light before deposition on graphene, the diazirine moiety is cleaved and a reactive carbene species is formed. The latter is prone to react with solvent molecules, leading to a mixture of new compounds bearing different functionalities.

Scanning tunneling microscope (STM) imaging was used to characterize the nanoscale arrangement of the supramolecular lattices formed on graphite and graphene surfaces, which determines the periodicity and geometry of the induced potentials. Electrical characterization was then performed on graphene-based field-effect devices to assess the effect of the different self-assembled organic layers on the electrical characteristics of the 2D material. Computational simulations allowed to unravel the interactions of the molecular assembly with graphene; a theoretical analysis further confirmed that the origin of the doping effects can be fully attributed to the orientation of electrical dipoles in the head groups. Finally, a periodic potential with the same geometry but a different intensity could be generated from a supramolecular lattice prepared after UV irradiation of the molecular building block in a different solvent.

In this way, the researchers managed to demonstrate that organic supramolecular lattices are suitable to create controllable 1D periodic potentials on the surface of graphene. Interestingly, the periodicity, amplitude and sign of the induced potentials can be pre-programmed and adjusted by careful molecular design. This bottom-up supramolecular approach can be extended and applied to other inorganic 2D materials such as transition metal dichalcogenides, paving the way to more complex multilayer van der Waals heterostructures. These findings are of great importance for the realization of organic–inorganic hybrid materials with controllable structural and electronic properties featuring unprecedented electrical, magnetic, piezoelectric and optical functionalities.