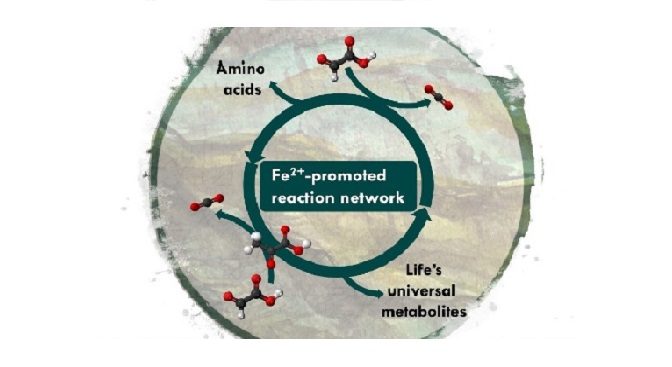 Synthesis and breakdown of universal metabolic precursors promoted by ironResearchers in Strasbourg, France, have found that mixing two small biomolecules, glyoxylate and pyruvate, in iron-salt-rich water produces a reaction network resembling life’s core biochemistry. This discovery provides insight into how chemistry on the early Earth primed the evolution of the most ancient life.The study was funded by the European Research Council and is published in the journal Nature. Scientists investigating the origins of life on Earth have long struggled to explain how life’s biochemistry got its start over 4 billion years ago. Biochemistry is organised around just five universal metabolic precursors built from C, O and H, just like heavy traffic in a big metropolis is organized around a few transit hubs. Why life uses the molecules and chemicalreactions that it does, among countless alternatives, is a complete mystery.A group of researchers led by Prof Joseph Moran at the University of Strasbourg has spent the past few years working on the origins of biological metabolism. “The idea that biological metabolism had a closely related chemical precursor that used similar intermediates and transformations is an attractive option”, says Moran. Recently, the group recreated a purely chemical equivalent of the AcCoA pathway, a set of reactions used by microbes to produce acetate (two carbons) and pyruvate (three carbons) from CO2. Building compounds larger than three carbons from building blocks made from CO2 was where progress stalled. To accomplish such feats, life relies on complex enzymes and a chemical energy carrier, ATP. But both enzymes and ATP are complex structures that couldn’t have existed on a lifeless Earth. How then did life build its biochemistry before enzymes and ATP?Moran explains: “The breakthrough came from realizing that a chemical metabolism may have functioned in a slightly different way to the way it works in life today, while preserving the big picture.” The team became inspired by the central role of a two-carbon metabolite, glyoxylate, in a model published earlier by theoretical biologist Daniel Segrè. Another clue came from organic chemists Ram Krishnamurthy and Greg Springsteen, who reported that pyruvate (three carbons) and glyoxylate (two carbons) easily react to form C-C bonds in water. Kamila Muchowska, a postdoctoral researcher in Moran’s team and first author of the current study describes: “We mixed glyoxylate and pyruvate in warm, iron-rich water and noticed it gives rise to a reaction network with over 20 biological intermediates, including ones that are as big as six carbons.” Not only does the network increase in complexity over time, but it also breaks the intermediates back down to CO2, just like life does. “The life-like chemical system obtained this way conceptually resembles the function of biological anabolism and catabolism – no enzymes needed, just add iron”, explains Moran.As part of the study, the researchers tested what happens if a source of nitrogen and a source of electrons are introduced into the system. “When we added hydroxylamine and metallic iron to the experiment, the reaction network produced four biological amino acids”, explains Sreejith Varma, a co-author of the study. Moran notices: “Interestingly, in the geneticcode, those same four amino acids all have codons that starts with G, supporting ideas that metabolism and the genetic code may have emerged in parallel.”The newly discovered reaction network has so much in common with known biological cycles that the team wonders whether the Krebs and glyoxylate cycles could have had purely chemical origins. “We think chemical metabolism could have built precursors of biological cycles this way, before ATP and enzymes existed”, says Muchowska. The Strasbourg researchers are now eager to see how the reaction network can change in response to different elements, and whether it can lead to the molecules of genetics.