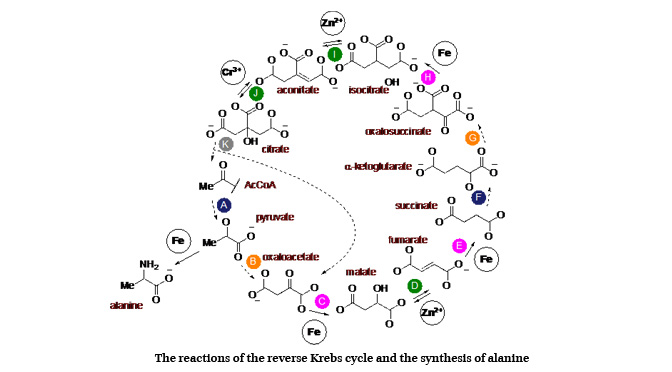 Researchers from the University of Strasbourg have shown that a large part of an anabolic pathway central to biochemistry can be promoted by simple metals without the need for enzymes.   The pathway known as the reverse Krebs cycle is thought to have been one of the earliest metabolic pathways in early life. This new research suggests it could have had its beginnings as prebiotic chemistry on the early Earth. The results have been published in Nature Ecology & Evolution.

Metabolism is the sum of the chemical processes by which life builds up and breaks down its molecules.  Attempts to understand how metabolism began lead to a chicken and egg problem: the reactions of metabolism only work when catalyzed by enzymes, whereas the enzymes themselves are built from metabolism. Which came first?

To resolve this problem, researchers from the Institut de Science et d’Ingénierie Supramoléculaires of the CNRS & the University of Strasbourg set out to find whether the reactions of one of the most ancient anabolic pathways of life could be promoted without enzymes. The reverse Krebs cycle consists of 11 reactions and contains five molecules that represent the universal synthetic precursors for biosynthesis, including amino acids, sugars, lipids and nucleic acids. The researchers found that 6 of the 11 reactions of the reverse Krebs cycle could be promoted under a single set of conditions by using Fe0, Zn2+ and Cr3+ in hot acidic water. Amino acid synthesis was also achieved starting from intermediates of the cycle by using the same conditions. The results support the hypothesis that the reverse Krebs cycle may have initiated as prebiotic chemistry very early in the transition from geochemistry to biochemistry, providing a parsimonious explanation for why biochemistry has the structure that it does. The reactions of the reverse Krebs cycle and the synthesis of alanine.