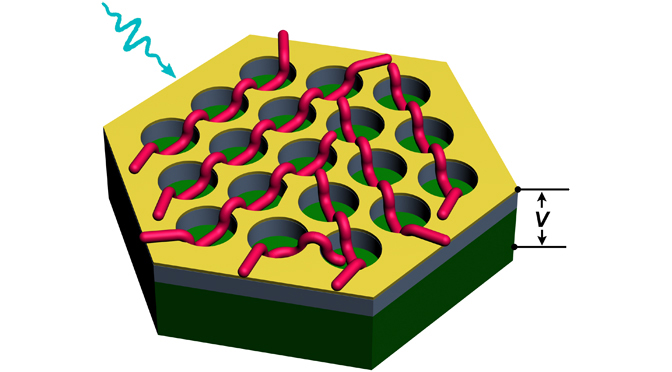 Researchers from the University of Strasbourg & CNRS (France), in collaboration with the University of Nova Gorica (Slovenia), have described a general and extremely versatile approach to integrate supramolecular nanowires in a novel nanomesh scaffold featuring asymmetric (nano)electrodes to realise high-performance photoelectrical conversion, paving the way to potential applications at the crossroads of optoelectronics and nanotechnology. These results have been published in Nature Nanotechnology.

Supramolecular nanowires made of self-assembled organic semiconducting building blocks are well-suited components for the development of high-performance optoelectronic devices owing to their superior optical (light absorption and sensitivity), electronic (charge carrier transport) and morphological (surface-to-volume ratio) properties. However, the fabrication of organic nanowire-based devices remains challenging, mainly because of a lack of control over the interface between the nanowire and the electrodes.

Now a European team of researchers from Strasbourg and Nova Gorica developed a new strategy to simultaneously connect hundreds of supramolecular nanowires to nanoelectrodes with different energy levels, which is necessary to ensure a direct and efficient harvesting of light energy. For that purpose, a honeycomb-like scaffold featuring millions of holey nanoelectrodes was designed and fabricated by use of a stepwise approach combining nanosphere lithography and reactive ion etching. A commercially available n-type (electron-transporting) organic semiconductor, N,N′-dioctyl-3,4,9,10-perylenedicarboximide (PTCDI-C8), was chosen as a prototypical building block known to form robust supramolecular nanowires.

After self-assembly of the PTCDI-C8 nanowires, deposition on the nanomesh scaffold and thermal treatment in an inert atmosphere, a photovoltaic effect attributed to light absorption by the supramolecular nanowires was observed. Importantly, the width and the thickness of the nanowires as well as the diameter and the depth of the nanowells can be easily tailored.

Taking their work to another level, the researchers managed to selectively modify the bottom electrode upon deposition of a thin layer of a p-type (hole-transporting) semiconducting polymer such as poly(3-hexylthiophene) (P3HT) on the silicon surface inside the nanowells, forming a p–n junction with the PTCDI-C8 supramolecular nanowires without alteration of the nanomesh morphology. After optimisation, the photonic devices exhibit outstanding characteristics, such as a high signal-to-noise ratio (107), an ultrafast photoresponse time (10 ns) and an external quantum efficiency exceeding 55%.

These findings are of great importance for the realisation of high-performance optoelectronic devices based on organic nanostructures (e.g. nanowire-based light-emitting diodes or spin valves), by filling the gap between bottom-up nanostructured semiconductors and macroscopic optoelectronic applications.